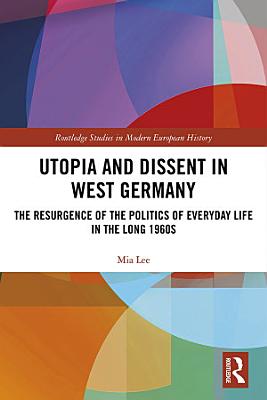 Just as Chancellor Konrad Adenauer was seeking re-election on a campaign of "no experiments," art avant-garde groups in West Germany were reviving the utopian impulse to unite art and society. Utopia and Dissent in West Germany examines these groups and their legacy. Postwar artists built international as well as intergenerational networks such as Fluxus, which was active in Düsseldorf, Wiesbaden, and Cologne, and the Situationist International based in Paris. These groups were committed to undoing the compartmentalization of everyday life and the isolation of the artist in society. And as artists recast politics to address culture and everyday life, they helped forge a path for the West German extraparliamentary left. Utopia and Dissent in West Germany traces these connections and presents a chronological map of the networks that fed into the extraparliamentary left as well as a geographical map of increasing radicalism as the locus of action shifted to West Berlin. These two maps show that in West Germany artists and their interventions in the structures of everyday life were a key starting point for challenging the postwar order.

Utopia and Dissent in West Germany

Authors: Mia Lee
Categories: Social Science
Just as Chancellor Konrad Adenauer was seeking re-election on a campaign of "no experiments," art avant-garde groups in West Germany were reviving the utopian i

Authors: Eleni Braat
Categories: History
Back in 1989, many anticipated that the end of the Cold War would usher in the ‘end of history’ characterized by the victory of democracy and capitalism. At

Authors: Mark Fenemore
Categories: History
As fought in 1950s Berlin, the cold war was a many-headed monster. Winning stomachs with enticing consumption was as important as winning hearts and minds with

Authors: Laurien Crump
Categories: History
The Cold War is conventionally regarded as a superpower conflict that dominated the shape of international relations between World War II and the fall of the Be

The European Illustrated Press and the Emergence of a Transnational Visual Culture of the News, 1842-1870

Authors: Thomas Smits
Categories: History
This book looks at the roots of a global visual news culture: the trade in illustrations of the news between European illustrated newspapers in the mid-nineteen

Authors: Daphna Sharfman
Categories: History
This book presents a multidimensional case study of international human rights in the immediate post-Second World War period, and the way in which complex refug