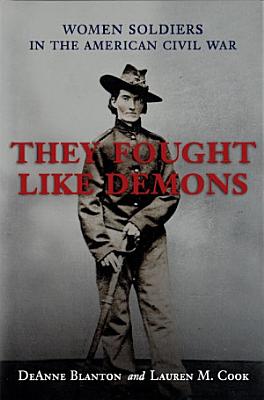 Popular images of women during the American Civil War include self-sacrificing nurses, romantic spies, and brave ladies maintaining hearth and home in the absence of their men. However, as DeAnne Blanton and Lauren M. Cook show in their remarkable new study, that conventional picture does not tell the entire story. Hundreds of women assumed male aliases, disguised themselves in men’s uniforms, and charged into battle as Union and Confederate soldiers—facing down not only the guns of the adversary but also the gender prejudices of society. They Fought Like Demons is the first book to fully explore and explain these women, their experiences as combatants, and the controversial issues surrounding their military service. Relying on more than a decade of research in primary sources, Blanton and Cook document over 240 women in uniform and find that their reasons for fighting mirrored those of men—-patriotism, honor, heritage, and a desire for excitement. Some enlisted to remain with husbands or brothers, while others had dressed as men before the war. Some so enjoyed being freed from traditional women’s roles that they continued their masquerade well after 1865. The authors describe how Yankee and Rebel women soldiers eluded detection, some for many years, and even merited promotion. Their comrades often did not discover the deception until the “young boy” in their company was wounded, killed, or gave birth. In addition to examining the details of everyday military life and the harsh challenges of -warfare for these women—which included injury, capture, and imprisonment—Blanton and Cook discuss the female warrior as an icon in nineteenth-century popular culture and why twentieth-century historians and society ignored women soldiers’ contributions. Shattering the negative assumptions long held about Civil War distaff soldiers, this sophisticated and dynamic work sheds much-needed light on an unusual and overlooked facet of the Civil War experience.

Authors: Laura Leedy Gansler
Categories: Social Science
The incredible account of how one heroic woman defied convention in 19th-century America to live, work, and defend her country at a time of war, when women were

The Light and the Darkness

Authors: R. Dekar
Categories: Fiction
Darien and the others have returned, continuing their adventures across Gaianterra, the war-torn land filled with wonder and magic. What new perils await our ch

The Wit And Wisdom Of Discworld

Authors: Stephen Briggs
Categories: Fiction
'A marriage is always made up of two people who are prepared to swear that only the other one snores.' From, THE FIFTH ELEPHANT 'Inside every old person is a yo

Wisconsin and the Civil War

Authors: Ronald Paul Larson
Categories: Photography
Wisconsin troops fought and died for the Union on Civil War battlefields across the continent, from Shiloh to Gettysburg. Wisconsin lumberjacks built a dam that

War Is All Hell

Authors: Edward J. Blum
Categories: History
"An examination of how Americans brought concepts of the devil, demons, and hell into every fabric of their lives and times in the American Civil War. These inf

The Oxford Handbook of Gender, War, and the Western World Since 1600

Authors: Karen Hagemann
Categories: History
To date, war history has focused predominantly on the efforts of and impact of war on male participants. However, this limited focus disregards the complexity o

Authors: Pamela D. Toler
Categories: History
Who says women don’t go to war? From Vikings and African queens to cross-dressing military doctors and WWII Russian fighter pilots, these are the stories of w

The Covenant of the Forge

Authors: Dan Parkinson
Categories: Fiction
Explores the folklore and history of the dwarven clans of Krynn through the bickering clans' reconciliation and the construction of the legendary Thorbardin. By