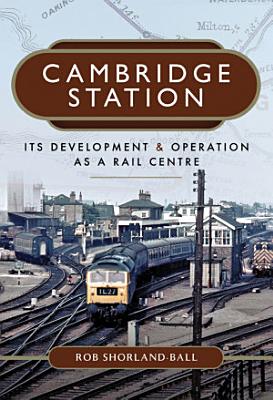 Why build a Railway to Cambridge? This is the first substantive illustrated book about Cambridge Station which explores the opening of the station in 1845; the four principal railway companies which all worked to and from the station in a tangle of mutual inconvenience; the extensive goods traffic which was handled in the several goods yard around the station; and the way the Station operated from early beginnings, to what Abellio East Anglia and Network Rail offer today. Cambridge Station is renowned for having one of the longest single platforms in the UK, served by Up and Down trains. Ingenious trackwork and extensive signalling could satisfy passengers who were told at the central booking hall entrance: 'Turn left for Kings Lynn or right for London.' The book contains several pictures never before published, showing how the Eastern Counties and then the Great Eastern Railway Companies contrived Cambridge Station and the Engine Sheds, Goods Yards, Signal Boxes and extensive sidings to serve East Anglia. And it tells people stories too, because the author worked on the station in the 1950s and 1960s and knows Cambridge and East Anglia well. He is a geographer and writes with knowledge, wisdom and humour.

Authors: Rob Shorland-Ball
Categories: Transportation
Why build a Railway to Cambridge? This is the first substantive illustrated book about Cambridge Station which explores the opening of the station in 1845; the

the early days of the power station industry

The Boston Almanac and Business Directory

Annual Report of the Postmaster General

The Cambridge Directory for ...