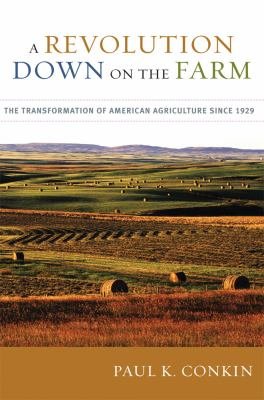 A Revolution Down on the Farm Book Details:

At a time when food is becoming increasingly scarce in many parts of the world and food prices are skyrocketing, no industry is more important than agriculture. Humans have been farming for thousands of years, and yet agriculture has undergone more fundamental changes in the past 80 years than in the previous several centuries. In 1900, 30 million American farmers tilled the soil or tended livestock; today there are fewer than 4.5 million farmers who feed a population four times larger than it was at the beginning of the century. Fifty years ago, the planet could not have sustained a population of 6.5 billion; now, commercial and industrial agriculture ensure that millions will not die from starvation. Farmers are able to feed an exponentially growing planet because the greatest industrial revolution in history has occurred in agriculture since 1929, with U.S. farmers leading the way. Productivity on American farms has increased tenfold, even as most small farmers and tenants have been forced to find other work. Today, only 300,000 farms produce approximately ninety percent of the total output, and overproduction, largely subsidized by government programs and policies, has become the hallmark of modern agriculture. A Revolution Down on the Farm: The Transformation of American Agriculture since 1929 charts the profound changes in farming that have occurred during author Paul K. Conkin’s lifetime. His personal experiences growing up on a small Tennessee farm complement compelling statistical data as he explores America’s vast agricultural transformation and considers its social, political, and economic consequences. He examines the history of American agriculture, showing how New Deal innovations evolved into convoluted commodity programs following World War II. Conkin assesses the skills, new technologies, and government policies that helped transform farming in America and suggests how new legislation might affect farming in decades to come. Although the increased production and mechanization of farming has been an economic success story for Americans, the costs are becoming increasingly apparent. Small farmers are put out of business when they cannot compete with giant, non-diversified corporate farms. Caged chickens and hogs in factory-like facilities or confined dairy cattle require massive amounts of chemicals and hormones ultimately ingested by consumers. Fertilizers, new organic chemicals, manure disposal, and genetically modified seeds have introduced environmental problems that are still being discovered. A Revolution Down on the Farm concludes with an evaluation of farming in the twenty-first century and a distinctive meditation on alternatives to our present large scale, mechanized, subsidized, and fossil fuel and chemically dependent system.

A Revolution Down on the Farm

Authors: Paul Conkin
Categories: History
At a time when food is becoming increasingly scarce in many parts of the world and food prices are skyrocketing, no industry is more important than agriculture.

Authors: Drew A. Swanson
Categories: Social Science
Beyond the Mountains explores the ways in which Appalachia often served as a laboratory for the exploration and practice of American conceptions of nature. The

Down on the Farm

Authors: James W. Cortada
Categories: Business & Economics
"A history of the role of information in the United States since 1870"--

In Defense of Processed Food

Authors: Robert L. Shewfelt
Categories: Technology & Engineering
It has become popular to blame the American obesity epidemic and many other health-related problems on processed food. Many of these criticisms are valid for so

Authors: Bryan L. McDonald
Categories: History
Debates during the postwar years about how food power could help the United States achieve goals such as stability, prosperity, and security were part of a larg

Greening the Red, White, and Blue

Authors: Thomas Jundt
Categories: History
In popular imagination, environmentalism is often linked to Rachel Carson's Silent Spring and the political activism of the 1960s and '70s that moved increasing

A Companion to Global Environmental History

Authors: J. R. McNeill
Categories: History
The Companion to Global Environmental History offers multiple points of entry into the history and historiography of this dynamic and fast-growing field, to pro

Authors: Shane Hamilton
Categories: History
America fought the Cold War in part through supermarkets—and the food economy pioneered then has helped shape the way we eat today Supermarkets were invented